Seventh-day Adventists are devoted to helping people understand the Bible to find freedom, healing, and hope.

About the Adventist Church:

Taken from the Adventist World Magazine, NAD Edition of December 2015

I’ve always thought it fascinating that my paternal grandfather sat as a boy at the feet of Ellen G. White and listened to her stories. Ellen White, who lived nearby, visited the Wilsons’ ranch home near Healdsburg, California, in the early 1900s. My grandfather, Nathaniel C. Wilson, and his three brothers eagerly gathered around her chair to listen as she lovingly told them stories. 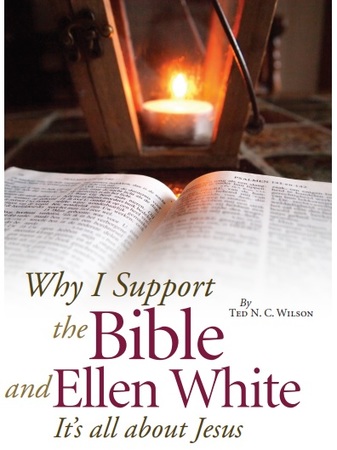 But those visits aren’t the only reason our family has fond memories of Ellen White. We owe our knowledge of the Advent message to her direct practical and prophetic evangelistic activity. My great-grandparents, William and Isabella, immigrated to the United States from Ireland around 1870, eventually becoming fruit and cattle ranchers and owners of a country store in California.

Isabella joined the Adventist Church, but William did not. Then William attended an Adventist camp meeting at the invitation of his wife in 1905. The speaker was Ellen White, and she spoke about the need of all sinners to have a Savior and allow Him to change their lives. She made an earnest appeal, and William went to the front, giving his heart to the Lord.

My great-grandfather studied the Advent message for a year. He closed his store on Sabbath. He was baptized and later became the first elder of the Healdsburg Seventh-day Adventist Church, the forerunner location of Pacific Union College.

Christ changed William’s life, and he became known as a generous man, helping people in need. The transformation in the life of my great-grandfather is among the reasons I firmly support both the Bible and Ellen White’s writings. But more significantly, the Bible and the Spirit of Prophecy came from the same source—God—and have the same message: pointing people to Jesus and preparing them for His soon coming.

The Spirit of Prophecy was given to nurture and assist God’s last-day movement with instruction from heaven. As we come to the close of 2015, let’s again consider the writings of Ellen G. White and their meaning for us today. We’ll do this in a question-and-answer format based on a Sabbath message I gave during the Spirit of Prophecy Symposium at Andrews University on October 17, 2015.

In the Seventh-day Adventist Church we accept Ellen G. White as a modern servant of the Lord and prophet. I believe and attest that the writings of the Spirit of Prophecy are believable and true because Ellen G. White and her prophetic ministry pass the four biblical tests of a prophet:

1. Her writings agree with the Bible, fulfilling Isaiah 8:20.
2. Her life and works testify of her connection with God, fulfilling Matthew 7:20.
3. Her prophecies have come to pass, fulfilling Jeremiah 28:9.
4. Her writings lift up Christ and affirm Him as the Son of God, who came to this earth to save us, fulfilling 1 John 4:2. In addition, her life and work is verified by physical manifestations during visions, the timeliness of her work at the end of time, the certainty and fearlessness of her pronouncements, the high spiritual plane of her work, and the practical nature of her explanations about multiple aspects of the Christian life.

Why do Adventists refer to Ellen White’s writings as the Spirit of Prophecy?

The spirit of prophecy is described by the Bible as one of the two characteristics of God’s last-day, remnant church. Revelation 12:17 says: “And the dragon [Satan] was enraged with the woman [God’s church], and he went to make war with the rest [or remnant] of her offspring [or seed, God’s last-day people and church], who keep the commandments of God and have the testimony of Jesus Christ.”

Are Ellen White’s writings equal with the Bible?

We have seen and are seeing determined efforts on the part of people motivated by Satan to attack Ellen White’s writings and make it “of none effect.” The Word of God and the Spirit of Prophecy are both products of heavenly inspiration and are thus accurate accounts describing the great controversy between good and evil, between Christ and Satan. This is why the devil is determined to destroy the truth found in the Bible and the Spirit of Prophecy.

Do you have concerns about how church members treat the Bible and Ellen White’s writings?

As we face the last days of earth’s history, we know there will be a determined effort by Satan to destroy the effectiveness of the Bible and the Spirit of Prophecy. We see the neutralization of God’s authoritative Word all around us. The historicalcritical method applied to the Word of God reduces its effectiveness as authoritative. It’s Satan’s plan to undermine God’s plain “Thus saith the Lord.”

One of the greatest threats against the Spirit of Prophecy is not necessarily animosity but rather the threat of indifference. Today many members are unacquainted with it, don’t read it, or just plain ignore it. The devil is intent on destroying the influence of the Bible and the Spirit of Prophecy because it contains the counsel needed to help finish God’s work on this earth through the power of the Holy Spirit.

What is the impact of Ellen White’s writings on the church and the world?

This church wouldn’t be where it is without the special guidance given it by God through Ellen White in the writings of the Spirit of Prophecy. This counsel has been instrumental in establishing publishing, health, education, humanitarian, and media institutions. The Spirit of Prophecy guides the pastoral, evangelistic, missionary, and administrative expansion of the church. It provides instruction in almost every aspect of life, including theology, lifestyle, personal health, the family, the home, young people, interpersonal relationships, personal stewardship, and many others. The Spirit of Prophecy is guiding God’s people and always will until the Lord returns. As a result of Spirit of Prophecy guidance, the Seventh-day Adventist Church is not just another denomination but a heaven-born Advent movement with a special destiny: a mission and message to proclaim found in Revelation 14:6-12—the three angels’ messages.

What would Ellen White say to people who express disappointment in the church?

The devil knows that if he can get God’s people to look to themselves and their own opinions instead of looking to Christ, he’ll be able to bring in dissension, disunity, and tension. It’s one of his greatest tools against the mission of the Seventh-day Adventist Church.

God has called us to be participants in the greatest proclamation of truth in history, the culmination of the great controversy between Christ and Satan. God entrusts us with the task of sharing Christ, who lived a sinless life, died for us, rose again, who is now interceding on our behalf as our high priest, and who is to soon return to take us to heaven. We’ve been called to share the Word of God in all its power through the guidance of the Holy Spirit.

In this heavenly calling we’ll be confronted with people who’ll disagree with our message and mission. Because of the apathy of others with the church, we may be tempted to become discouraged. Whatever we may face, we shouldn’t be tempted to work independently and apart from the church. We’re called to work within God’s last-day remnant church, not apart from it.

Stay unified with your local church and with the worldwide church family. Stay close to the church regardless of its imperfections. Keep the Lord and His mission for His church always before you.

When you read the Spirit of Prophecy, you’ll be positively changed forever as it points us back to Christ, His ministry, and His work for us in preparing a world through the Holy Spirit’s leading for the new world to come after the Lord’s return. The Spirit of Prophecy has given me an inexhaustible resource for implementing heaven’s plans for the Advent movement. When I think about the Spirit of Prophecy, I’m thrilled with happiness that God would provide us with so much information to accomplish His will in our lives personally and for His church’s mission to the world.

Ted N.C. Wilson, is the President of the Seventh-day Adventist Church

Seventh-day Adventist beliefs are meant to permeate your whole life. Growing out of scriptures that paint a compelling portrait of God, you are invited to explore, experience and know the One who desires to make us whole.

A Global Family of Faith